Before he was Norman Spear, hate group founder and possible Russian asset Rinaldo Nazzaro was just another Jersey boy. (…) Like the neo-Nazi group Atomwaffen Division, which has been linked to five murders and reportedly shared some members with the Base, Nazzaro’s group would be interested in “accelerationism” — a strain of white nationalism aimed at hastening “the boogaloo,” or societal collapse, through real-world action, including violence. “I’ll be the lightening rod [sic],” Norman Spear would tell one person over Twitter, “but you need to pay me back in blood (preferably not your own).” Together, Ron and Lyuda, as their friends knew them, were carried uptown in a black stretch limousine to St. Nicholas Cathedral on East 97th Street. In keeping with Russian Orthodox practice, the bearded priest placed crimson-and-gold crowns on their heads. Afterward, wearing wedding rings from Tiffany, they posed for photos in nearby Central Park. That evening, they joined their guests for a reception at Remi, a Northern Italian restaurant on West 53rd Street. As a videographer captured the scene — later editing the footage into a six-and-a-half-minute video scored to Savage Garden’s “Truly Madly Deeply” and Alicia Keys’s “No One” — the couple danced with family and an ethnically varied group of friends. The Base’s operations would eventually stretch far beyond Nazzaro. This past November, 18-year-old Richard Tobin, an alleged member of the Base in South Jersey, was arrested on suspicion of conspiracy to commit vandalism of two synagogues in the Midwest. Two months later, in Maryland and Delaware, the FBI arrested three alleged Base members on weapons and other charges: 27-year-old Patrik Mathews, a former combat engineer in the Canadian Army Reserve turned international fugitive; 33-year-old Brian Mark Lemley; and William Garfield Bilbrough IV. On January 15, police in Floyd County, Georgia, helped by the FBI, arrested another three alleged Base members — 21-year-old Luke Austin Lane, 19-year-old Jacob Kaderli, and 25-year-old Michael Helterbrand — charging them with plotting to overthrow the government and to kill a married couple they believed to be members of antifa. Two days later, the FBI arrested 22-year-old suspected Base member Yousef Omar Barasneh of Oak Creek, Wisconsin, for allegedly desecrating a synagogue. When they burst into his parents’ house, he was still in bed, a loaded firearm beside him, according to a court document. Base members have also been identified in Europe, South Africa, and Australia, among other places.The sweep and breadth of the American arrests was particularly noteworthy because the entire premise of the Base was that its decentralized cell structure would guard against just this sort of vulnerability. The group’s name was the English translation of Al Qaeda, whose radicalism and strategy of “leaderless resistance,” if not its racial makeup, are widely admired among neo-Nazis. Of course, like Al Qaeda, it did have a leader, and in a Guardian article on January 23, reporter Jason Wilson was able to identify the man whom Base members knew only as Norman Spear or Roman Wolf. He was, in fact, Nazzaro, an alumnus of the elite Delbarton School in Morristown and a current resident of Russia. It was a reminder, in this time of rising white nationalism, not only of all the rocks still to be turned over, and of the creatures wriggling in the dark beneath them, but of their surprising cultural penetration, numbering among them not just Dylann Roof–style revanchists but an educated, onetime Flatiron District resident with Establishment ties.

via nymag: The Prep-School Nazi

On popular forums like 4chan and Reddit, involuntary celibates are flocking to rejoice at people forced to live sexless lives – like them. (…) But on Reddit, 4chan, and misogynistic online forums, incels have been celebrating the fact that attractive people are about to be stuck inside – living their lives just like incels, and crucially, unable to have casual sex. On forums such as Reddit’s r/shortcels (short incels) and incel website Incels.Co, news of a UK lockdown last night kicked these posts into overdrive. Incels had been gloating about this prospect since coronavirus first appeared in the west, and now they had a case where Chads and Stacys – men and women demonised by incels for being sexually active and stereotypically attractive – would be forced indoors for the foreseeable. Posts gleefully remarked about how British “foids” (a derogatory slang term for sexually active women) would be “crying and suffering” and how “roasties” (a similar slang term) would be “seething”. “I would like to thank the [person] that ate a bat,” one Reddit user wrote, “and consequentially [sic] made roasties have mental breakdowns because they can’t get ravage by a Chad for weeks.”

via newstatesman: Incels are celebrating lockdown because attractive people can’t have casual sex

Former prime minister Alexis Tspiras said Glezos was a ‘symbol of a fighter’, In the pantheon of Greek politicians feted as much for fortitude as tenacity, few have stood out more than Manolis Glezos. Tributes poured in Monday as word spread that the indefatigable Greek leftist, who as teenager tore down the Nazi swastika flag from the Acropolis and more than seven decades later was elected as an MEP for the radical Syriza party, had died of heart failure at the age of 97. “For all eternity he will remain the symbol of a fighter,” Alexis Tsipras, the party leader and former prime minister, said. “The left, all of us today, feel like orphans but also so lucky to have walked with him.” Sentenced to death multiple times, confined to a prison cell for sixteen years and awarded the Lenin peace prize, Glezos took as much pride in his writing and political activism as he did his heroic wartime antics. When, at the age of 92, he was elected to the European parliament, his enduring popularity saw him win more votes than any other Greek MEP, but it was his courage as a young man ripping down the swastika from the Acropolis, within days of Nazi forces overrunning Greece, for which he is most famous. Then 18, the young Glezos had scaled the walls of the ancient citadel with a comrade in the dead of night on 30 May 1941 on a mission to remove the hated symbol. The first act of defiance under German occupation was credited with boosting morale and spurring the country’s resistance movement. 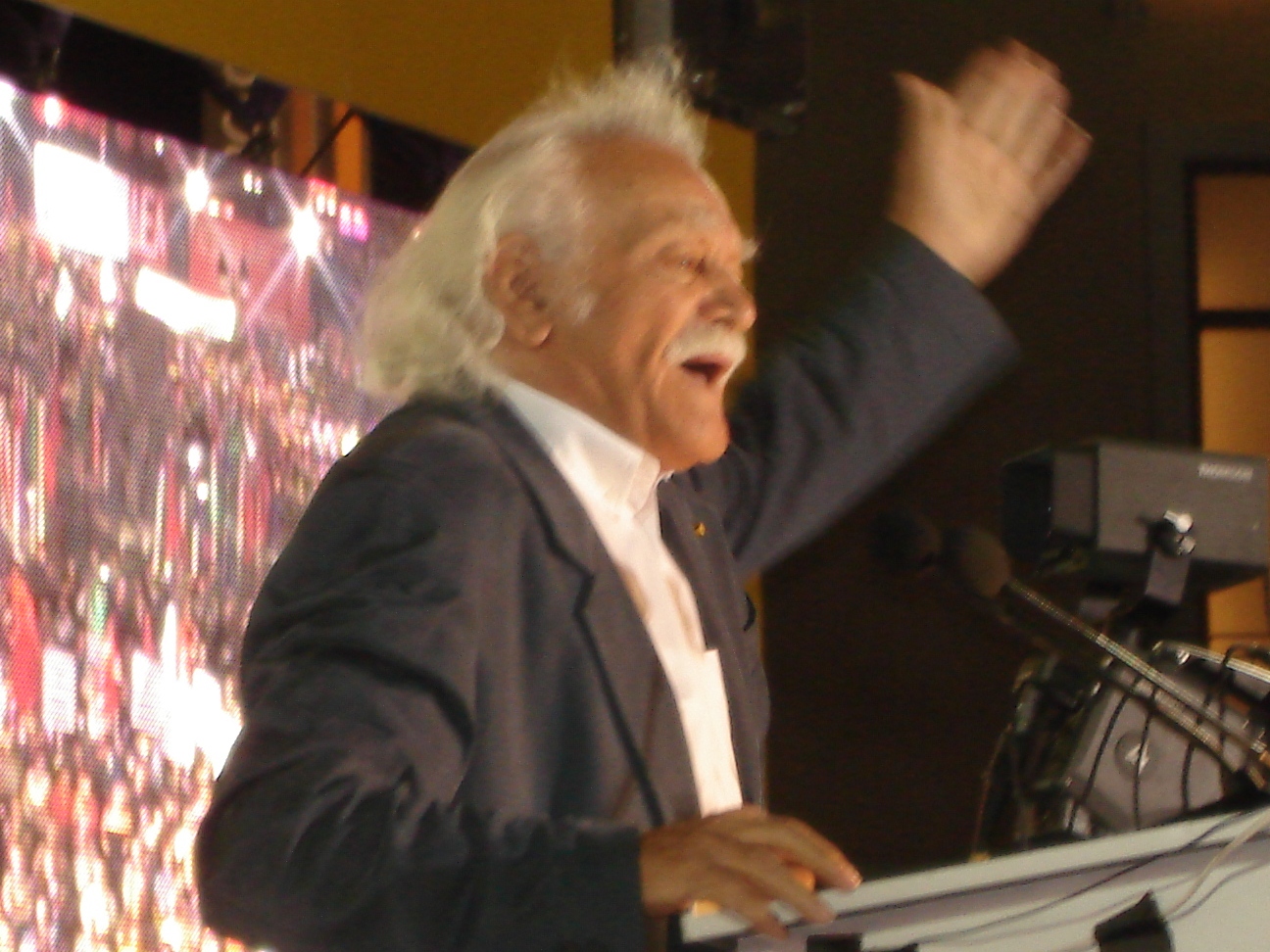 Vandalism of facility comes weeks after white nationalist unfurled Nazi flag during rally held by the Jewish Democratic candidate. A campaign office for US Democratic presidential candidate Bernie Sanders in Florida was vandalized with swastikas, a member of his team said Saturday. “Didn’t know if we should share, but one of our grassroots Bernie offices in Florida was vandalized with swastikas. Sheriff sent a team to clean it up,” wrote a staffer from the office on the “Florida for Bernie” Twitter account. Pictures from the scene showed a number of Nazi swastikas, as well as the sentence “voting didn’t stop us last time.” (…) The incident came weeks after a suspected white nationalist unfurled a Nazi flag during a Sanders rally in Arizona. One attendee at the rally told BuzzFeed that the man shouted anti-Jewish slurs at Sanders and gave the Nazi salute. The ADL identified the white supremacist as Robert Sterkeson of Glendale, Arizona, who on multiple occasions has posted videos of himself harassing Muslim and Jewish targets.

As the coronavirus spreads, the collapse of the project helps explain America’s acute shortage. Thirteen years ago, a group of U.S. public health officials came up with a plan to address what they regarded as one of the medical system’s crucial vulnerabilities: a shortage of ventilators. The breathing-assistance machines tended to be bulky, expensive and limited in number. The plan was to build a large fleet of inexpensive portable devices to deploy in a flu pandemic or another crisis. Money was budgeted. A federal contract was signed. Work got underway. And then things suddenly veered off course. A multibillion-dollar maker of medical devices bought the small California company that had been hired to design the new machines. The project ultimately produced zero ventilators. (…) Today, with the coronavirus ravaging America’s health care system, the nation’s emergency-response stockpile is still waiting on its first shipment. The scarcity of ventilators has become an emergency, forcing doctors to make life-or-death decisions about who gets to breathe and who does not. The stalled efforts to create a new class of cheap, easy-to-use ventilators highlight the perils of outsourcing projects with critical public-health implications to private companies; their focus on maximizing profits is not always consistent with the government’s goal of preparing for a future crisis.

via nytimes: The U.S. Tried to Build a New Fleet of Ventilators. The Mission Failed.